How Much Power of LED Light can Replace a 1000 Watt Metal Halide?

A common lighting technology in the commercial space is metal halide, at least in the past it was. Businesses are searching for efficient lighting to cut energy usage and reduce overhead.

When facility managers start their search, they often search for the wrong answer. Here are some common questions that get asked:

This post will cover the first question. We describe in detail the process and guidelines to replace 1000W HID Lights with LED.

How many LED watts does it take to replace a 1000 watt metal halide?

It’s a simple question that requires a complex answer. You can’t base your decision off of watts. Instead, you need to base your decision based on the amount of lumens you need. Once you get the lumens dialed in, find a fixture that produces that lumen amount.

What is a lumen?

In simple terms, it’s a unit or measurement of light. For light fixtures, we calculate the total lumen output. That tells us how bright the fixture will be.

Does this matter? A lot more than you may think. It’s what matters when replacing old light systems.

When replacing an existing fixture, determine the lumen output per fixture. Metal halide fixtures, with fresh bulbs, output at 100,000 (initial) lumens per 1000 watt bulb. You do not need to replace 1000W Metal Halide with 1000W LED. Instead, you need to find the equal replacement for the 100,000 lumens. You can forget about replacing watts and focus on replacing lumens.

In the above example, 1000W producing 100,000 lumens, the efficiency is 100 lumens per watt. In the world of today’s lighting, this is OK, but not great. You need to be aware of some other factors going on.

100,000 lumens may seem bright. It is. Metal Halide bulbs have high initial output. They suffer from fast lumen depreciation. It is common for a metal halide bulb to have lost 50% of it’s lumens at half-life. 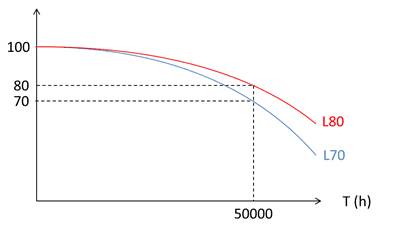 Loss of Light due to Reflection

LED light is directional. HID light sources are omni-directional and need reflectors to focus light. Any reflected lumen that bounces more than once is a lost lumen. Studies show that you can lose up to 30% of the effective lumens in the reflective process.

If a metal halide bulb has 100,000 initial lumens, the loss associated to reflected lumen bounce is around 30,000 lumens. 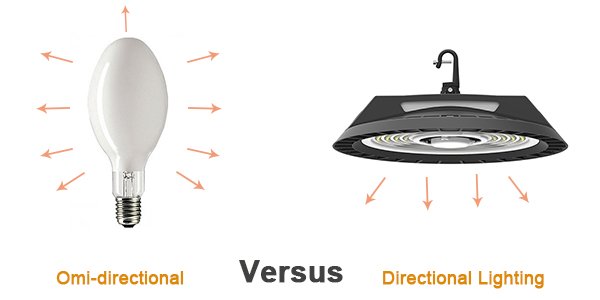 This relates to Color Rendering Index, or CRI. Its a measurement of quality, not quantity. The higher the quality, the less quantity you need. Often, customers tell us that 20,000 LED lumens appear brighter than 40,000 HID lumens.

The basic truth is you need less quantity when you have higher quality.

This has to do with how a camera perceives lumens versus how humans perceive lumens. Photopic lumens is light detected by a light meter or camera. Scotopic lumens are lumens detected by the human eye. LED produces visible scotopic light. It is rare to see a LED light produce IR or UV invisible spectrums. These wavelengths are invisible to people, so they have no value to us from a vision perspective. Light meters detect invisible spectrums, giving a false perception of brightness.

The science of scotopic lumens includes a factor used to adjust the photopic value to give a true representation of the lumens quality. This factor is the S/P ratio. The S/P ratio attempts to level lumen quality between light sources. The factor adjusts the effective value of lumens, up or down, from the photopic lumens.

Assume you have an 40,000 lumen high-pressure sodium (HPS) fixture and a 12,000 lumen LED fixture. Is the LED fixture capable of replacing the HPS fixture? Based on this data, you may think that the LED will only deliver 25% of the light provided by the HPS light.

The scotopic lumens provided by each light source would be the following:

Light sources with higher scotopic factors need less lumens for us to perceive and detect the light.

How to convert 1000W Metal Halide to LED

The basic takeaway from this is you need far fewer LED lumens than metal halide or HPS lumens.

Metal Halide bulbs are very bright out of the box, but degrade.

LED light is directional. LED light goes where its pointed. It is very efficient.

So how much LED Lumens do you need?

Only a photometric can tell you exactly how much you need. But in our 10+ years of selling LED lighting, our general rule of thumb is:

By searching for LED replacement for 1000w metal halide high bay you can find LEDs that are more efficient than 100 lumens/watt. Lumen efficiency for LED is getting closer to 200 lumens / watts. This will allow a cut of watts used by 75% or more.

But What Does “replacing” Consist of?

Are the LEDs in a retrofit kit as good as a LED fixture?

Yes. Despite of what you heard, there is no reason to think or believe that a retrofit conversion kit won’t perform or last as long as a new LED fixture. Retrofits don’t always make sense, but they do if you have a significant investment in your fixture or the look of your fixture. 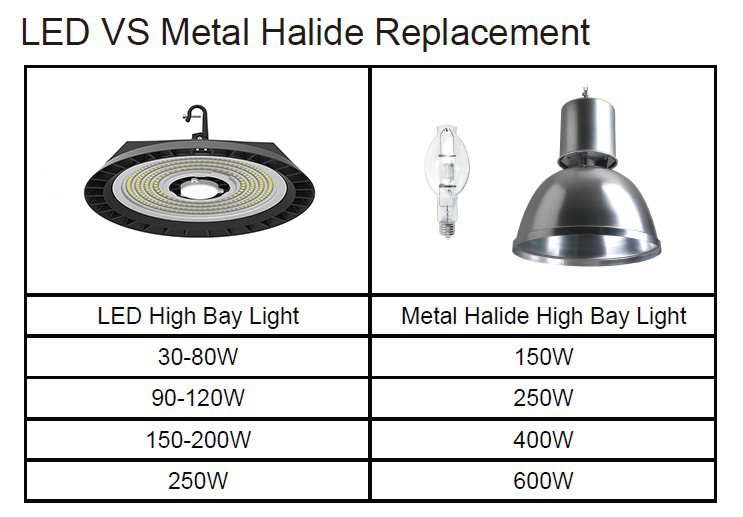 It is possible to replace a metal halide fixture with LED technology. It can be as simple as retrofitting or replacing your existing fixtures.

An investment in LED will pay back in many ways. This includes lower energy usage, lower maintenance costs, and higher quality of light produced.