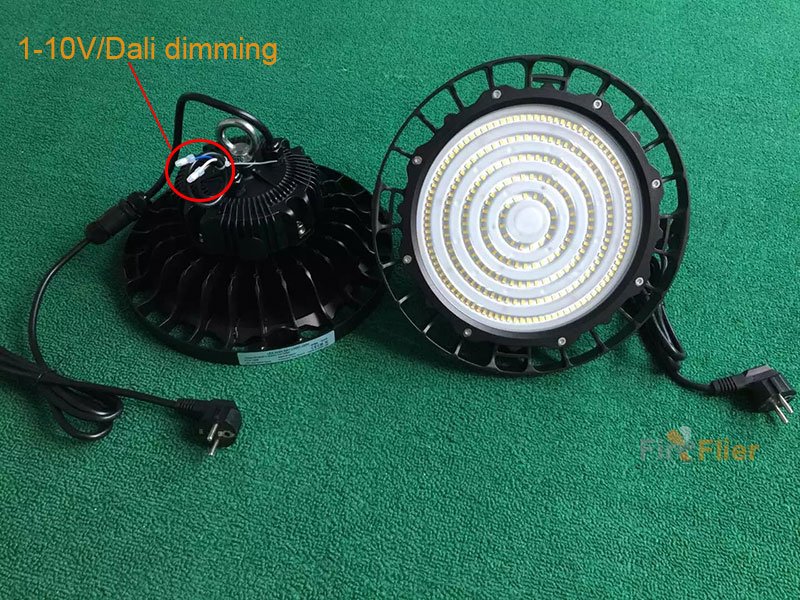 LED warehouse lights can use a significant amount of energy. Many warehouses will have 50-100 or more 250watt/400watt metal halide bulbs. Those can easily be replaced with High Bay LED Lightingand bring the wattage down to 100watts or so, but adding dimming can save another 35%. Switching to LED High Bay Dimming usually pays for itself in a few years of use.

Dimming high lumens LED lights such as UFO LED High Bay Lightsor Linear LED High Bay Lightsrequires a technology called 0-10v. The amount of wattage in this lights eliminates the classic wall dimmer as an option. It simply cannot handle the load. Luckily there is an even easier way to dim these lights.

This system of voltage control has been used for many years and is not a new technology. Tt is one of the earliest and most reliable light control systems out there. It was simply ‘forgotten’ because HID, metal halide and sodium bulbs were not dimmable. Since these were the main source of high lumens output over the last twenty years, nobody had the option of dimming.

In 0-10v process, the light signal is controlled through a DC voltage process that varies between volts 0 and 10. This way, the light control is able to control the voltage within these values, where 0 being the lowest while 10 denotes the maximum value that can be supplied to the light. The process is also known as the dimming level.

Using 0-10 is better for a few reasons. First, it is much safer. Since it does not affect the main power wires, you have less risk of fire and other safety issues at the switch. Large LED fixtures are much better suited to dimming than cheap switches. Second, it can be customized to control one fixture or entire blocks of lights easily. You have a lot more control. Third, it can handle dozens of fixtures off one switch. Effectively controlling thousands of watts of power. Finally, it is highly reliable. The failure rate of these systems is almost negligible, ensuring your dimming lasts as long as the LEDs.

What is PMW (pulse width modulation)?

Another term you may here is PMW. Pulse Width Modulation is essentially a technique to get results by using a digital indicator. Simply by sending a signal, (in this case electrical current) we can affect what the fixture does (in this case light output). Note that it is ‘Width’, often mistyped as Pulse With Modulation.

How does it work? The pulse width modulation is a sequence control process that allows the LED to reduce voltage and thus reducing its luminescence in the process. This is achieved by reducing the DC current from the string.

Pulse Wave Modulation is the communication system for any dimmable LED light as it controls the DC current that helps increase or reduce the energy to the light.

What is the relationship between 0-10v and PMW

Different terms for essentially the same thing. In lighting we call dimming systems 0-10v or 1-10v, but those are just so we know how many volts the driver needs. All 0-10v and 1-10v dimming is using PMW.

By having a 0-10v or 1-10v dimming system, you can now add different kinds of sensors or other smart items. You can add a motion sensor to each LED light and have it hang off the side of your UFO High Bay Light. This will help you turn it on or off when needed. You can also use a central motion sensor, so entire zone are utilized.

The Zigbee is the new concept that gives lighting industry an easy to use option to control consumer lighting. Its is an industry standard that is attempting to get everyone on the same page. Using a zigbee system you can use all kinds of computer or app controls and add motion or dusk to dawn sensors to your system. Expect big things from Zigbee compatible systems over the next decade.

Apart from LED lights, the Zigbee can also control clocks, switches and remotes wirelessly. Even door locks or other mechanical devices will be compatible in the future.

The Digital Addressable Lighting Interface (DALI) is a professional interface that allow users to control one or more LED devices. DALI can enable you to control LED drivers, dimmers, and electrical ballasts. Adding a motion sensor to DALI is quite possible, but the two devices will require to have a communication bus such as RS 232 for efficient communication.

It is a new breed of dimmable LED high bay light that allows you to efficiently control your lighting under low voltage conditions. All Z-wave bulbs are fully dimmable thanks to the Z-Wave technology.

Dimmable LED high bay lights are known to consume up to 35% less energy compared to other LEDs without it. This means that by using Dimmable LED lights, you can make great savings in your electricity bill. Contact Fireflier Lighting today to help you build your Dimmable lighting system.